After constructing my last, flimsy iteration of my RhymeBook, I decided to make some changes for the next iteration.

First of all, I decided to use the black matte board I had previously used for my cover as the material for my interior pages as well.  I used the laser cutter to etch in the content of each page, creating a nice “gold on black” aesthetic:

I also redesigned the structure of the outside of the book, using a more traditional “Scrapbook” design, which is much sturdier and sleeker than my original design: 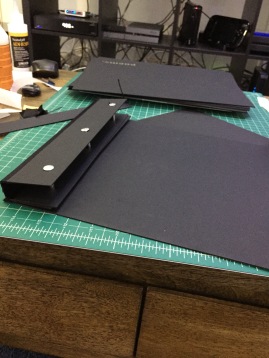 Part of the reason I had wanted to switch my page material to the thick black matte board, aside from the aesthetic, was that I thought that the pages would more consistently touch each other when closed, making my copper-tape switch mechanisms work better.  As I discovered upon assembling the new book, though, they touch even less consistently than the original card-stock paper.

So I decided to change my tech completely, going with flex sensors instead of the switch mechanisms. 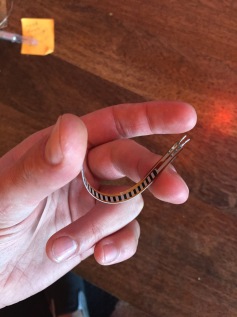 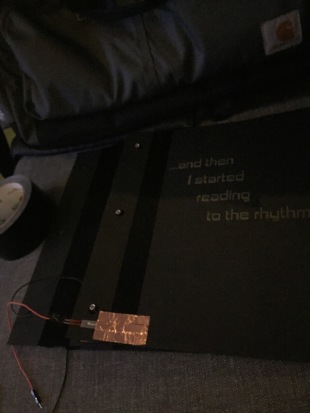 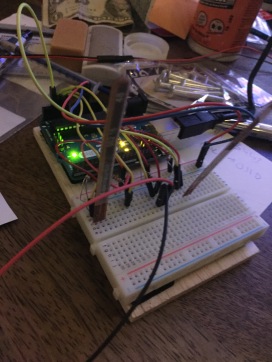 These are analog sensors; When they bend enough, they trigger the audio for the next page to play.

I had to rework my Max patcher more than expected to integrate this new tech.  I had to use a playlist rather than separate audio objects, with each sensor triggering a certain track on the playlist.  It works rather consistently now—  here’s the max patcher:

Here’s how it looks in action.  It’s buggy as hell right now, but the basic function is there:

It’s far from perfect.  I need to add another sensor to the cover to turn off the audio when the book closes, and it currently only works when going through the book from front to back.  Hopefully I can iron out these issues for the final.

I plan to add a bunch more pages using a multiplexer, to bind the cover in some sort of leather, and eventually I hope to integrate everything into the spine of the book using a Raspberry Pi instead of arduino, complete with headphone jack.