So while our final non-rectangular box may have ended up pretty ghetto, it has certainly taught us a lot about the vinyl cutter, its strengths and its limitations.

We found a really cool foam material at Michaels and hoped to cut it in the vinyl cutter.  Unfortunately, even with the blade setting turned way up and the speed turned way down, it barely made a dent in the foam and messed up the alignment in the middle of the print as it unsuccessfully tried to drag the blade through the foam.

We had some nice heavy textured card stock, so we opted to print on that instead, giving us an accurate, thorough cut that has enough structure to stand up on its own.  Since our edges don’t overlap, we squirted some “gap filler” in each joint, which made the folded box relatively sturdy. 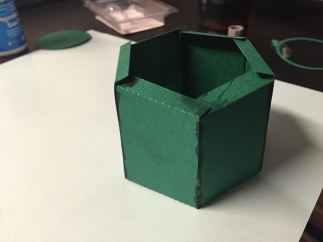 We wanted to give it some sort of top rim, so we decided to try cutting some felt-like fabric on the vinyl cutter.  Again, it didn’t go so well, but at least the fabric stayed aligned with the printer, so we ended up running the same piece through like 8 times, resulting in an almost-through cut, but we still needed to finish it off with scissors, and it was sloppy: 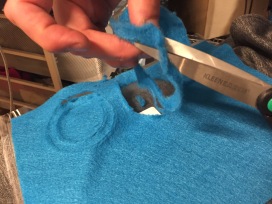 Brushed the top with rubber cement and laid the felt ring on top.  It still looks pretty ghetto but gains a bit more interest with the multiple materials: 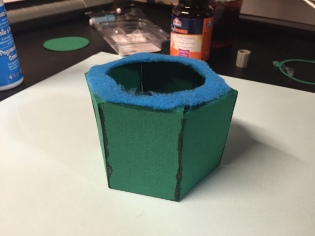 Not a portfolio piece by any stretch, but a good exercise, as I now feel very comfortable with the vinyl cutter & Silhouette Studio for anytime I need to precisely cut a thin material such as card stock.

I look forward to experimenting with the laser cutter next time I want to cut a thicker material, but for this particular assignment we wanted to try sticking with the vinyl cutter.